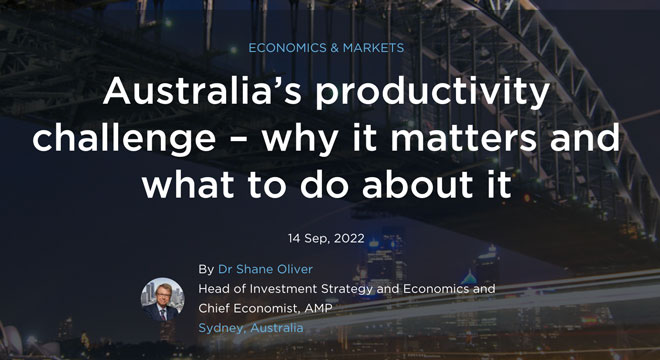 “Productivity isn’t everything, but, in the long run, it is almost everything”.
Paul Krugman

A hot topic in recent years in Australia amongst economists and policy makers has been the slowdown in productivity growth. This matters because as Paul Krugman points out “a country’s ability to improve its standard of living over time depends almost entirely on its ability to raise its output per worker.” Productivity is the key to driving real wages growth, real profit growth and asset price growth over long periods of time. It enables governments to boost service provision – in health, aged care, disability, defence etc – without raising the overall tax burden. And it can help keep inflation down. But its rate of increase has been slowing down leading to much angst about what to do about it. Despite lots of talk there hasn’t been a lot of action in addressing the problem over the last 15 years. This may be changing.

What is productivity growth

Productivity refers to the level of economic output for a given level of labour and capital inputs. Increased productivity means more is being produced for a given level of inputs. The concept of output usually referred to is Gross Domestic Product (GDP) and at its broadest inputs are both labour (hours worked) and capital (ie, buildings, structures & machinery). Dividing these inputs into the former gives “multi factor productivity”. However, its more common to see measures of labour productivity referred to – ie, GDP per hour worked – as they relate to growth in material living standards.

The next chart shows the annual rate of labour productivity growth (ie, the change in GDP per hour worked) since the mid-1980s. It’s shown as a 10-year trailing average so we can focus on the trend. Productivity growth rose to over 2% pa through the 1990s into the 2000s, but it’s slowed to 1.2%pa over the last decade.

As can be seen in the last chart, the longer-term pattern in labour productivity growth has correlated with a similar pattern in growth in GDP per capita (or GDP per person). Roughly speaking the slowdown in productivity growth from 2.2% pa in the 1990s to 1.2% pa over the last ten years means that after a 10-year period annual GDP will be 9% (or $300bn less in today’s dollars) than would otherwise have been the case, which means much lower average material living standards compared to what otherwise could have happened. Of course, we can make up for the drag on GDP growth by growing the population faster as has been the case since the mid-2000s but this does not address the negative impact on material living standards per person. Lower productivity growth translates to lower real wages growth, slower growth in profits and a reduced ability for the government to provide services that the community expects without taking on more debt.

The impact of this may have been masked through the mining boom years. But given increased risks around China – geopolitical risks and medium-term threats to Chinese growth from its property downturn and increased government involvement in its economy – we cannot rely on strong Chinese demand and commodity prices boosting national income indefinitely. And mining sector strength seems to have had a less beneficial impact recently (as measured by a rising mining sector profit share of GDP but a falling wages and non-mining profit share) which may lead to increased social tensions. And now real wages are falling rapidly.

What to do about it?

There are no quick and easy fixes. Simply boosting wages growth to match or exceed current high inflation may provide a short-term feel-good factor, but as we saw in the 1970s this would just run the risk of a wage-price spiral, the end result of which would likely be higher unemployment. The key is to acknowledge the problem, explain the options to Australians and then chart a path forward to boost productivity and growth in living standards. In recent years numerous reports – notably the Productivity Commission’s 2017 productivity review – have looked at what needs to be done. Key areas for action include the following:

Australia is in far better shape than many comparable countries – public debt, while up, is relatively low; inflationary pressures are weaker here than in the US and Europe; unemployment is very low; and we are politically less polarised and more open to compromise than the US and parts of Europe. After 15 years of policy drift though, declining productivity growth is contributing to falling real wages, high inflation and rising social tensions. This will weigh on investment returns if not adequately addressed. The best way to address these issues is to build a consensus and commitment for reform. Fortunately, the new Federal Government appears to be heading down this path, albeit there is a way to go.

While every care has been taken in the preparation of this information, neither National Mutual Funds Management Ltd (ABN 32 006 787 720, AFSL 234652) (NMFM) nor any other member of the AMP Group makes any representation or warranty as to the accuracy or completeness of any statement in it including, without limitation, any forecasts. Past performance is not a reliable indicator of future performance. This email has been prepared for the purpose of providing general information, without taking account of any of your objectives, financial situation or needs. You should, before making any investment decisions, consider the appropriateness of the information in this email, and seek professional advice, having regard to your objectives, financial situation and needs.